Maddens' lands are shown as plan 1 and Killeen's as plan 2 on the following map (click to  enlarge): 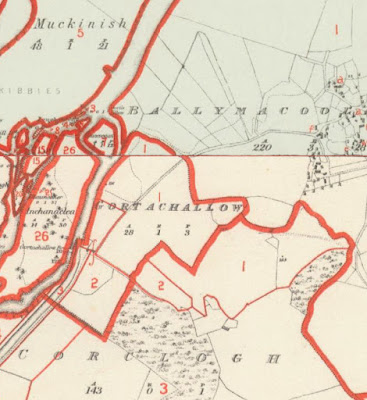 The Killeen house (and one out-house) is visible on this map, but not the two Madden houses. By the census of 1901, only one house (Killeen's) is found in Gortacallow.

The Lynch-Blossés were successors of the Lynch tribe of Galway from whom the term "lynching" derives and to the Moore and Blossé estates through marriage. The Moores lost their lands in Cromwellian times, but got some lands back (including Lusmagh) in the restoration.

Sir Henry, the 3rd Baronet Lynch=Blossé followed King James II into exile after the Battle of the Boyne and died in Brest where he is venerated as a saint. Despite following James they held onto their lands.

By 1854, the Lusmagh lands had already been sold by the Lynch-Blossé estate to Sir Robert James Graves, the eminent surgeon, inventor of Graves disease, new medical teaching methods and the second hand on watches, and he had died in 1853. His widow evicted over 100 tenants to make the estate more economical.

The headstone on the family grave at Kilmachonna shows that John Killeen succeeded James. John died on 22 May 1886, aged 75. This means that James, his father, was probably born around 1790 and would have been in his 60s or so at the time of the Griffith valuation.

We don't know anything else, at the moment, about the family of James, but the headstone tells us that John had (at least) 4 children:

Roger Killeen married Bridget McNeill in Parsonstown (now Birr) in 1887. Her baptism record, dated 23 June 1860, gives her surname as MacNeal, her father as John and her mother as Mary Keogh. The censuses of 1901 and 1911 show that Roger and Bridget, had eight children in all, five of whom survived:
The 3 children who died in infancy would apparently have come in between John and Maryanne.

By 1911, John was no longer living in the family home. At some time during his teens he was expelled from the home by his father. He joined the RIC in 1913 and, in 1921, was promoted to sergeant. He was discharged at Gormanstown on 5 May 1922, when the force was disbanded. Married in 1917 (to a Wexford woman) he moved to London where he raised a family and is found as a member of the Home Guard during the Second World War. He had two children, a son and a daughter. His son, John, became an Assumptionist priest and was given "Roger" as his religious name. His career is described on the web at: