Down Survey map of Lusmagh

The map of Lusmagh Parish as part of the Barony of Garrycastle in the Down Survey. The orientation of this map is unusual: we have to flip it twice (N/S and E/W), to get the "correct" orientation by modern practice.  The next map, also from the Down Survey (portion of the county map of Offaly or King's County) shows the  usual orientation. 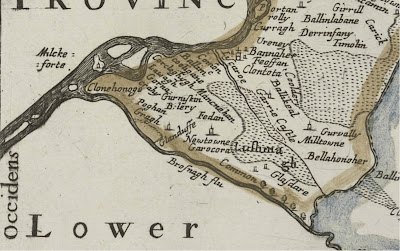 Lusmagh as depicted in the Down Survey, 1658.

The purpose of the Down Survey was to identify Catholic lands (95% of the land of Ireland) for confiscation and granting to Protestant soldiers and adventurers who had supported Oliver Cromwell's conquest of Ireland. This was the first detailed survey of any country.

While the map identified the freehold owners of  the land of Ireland, it was not maintained as a register and, therefore, soon lost relevance as evidence of current ownership.