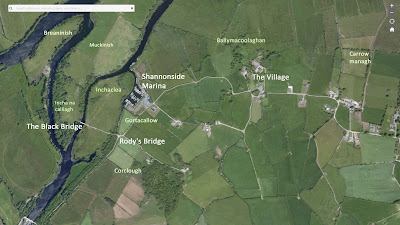 Some notes on the place-names of the Corclogh/ Ballymacoolaghan area:


The OSI maps accessed show no buildings on the islands, but there were undoubtedly people living there, perhaps in little shacks, in times past.

An island can be a lonely place for a family. The story is told of a man who lived on Muckinish with his elderly and feeble father. Needing company, he rowed over to the mainland for an evening of  card-playing, despite the pleas of his father not to leave him alone. While he was enjoying his evening with his mainland neighbours, his father died. Coming to the bank of the river, he found the ghost of his judgmental father sitting in his boat before him. He got such a fright he fell into the water and drowned. This death was unexpected so he did not realise he was dead. His ghost can now be heard late at night crying out "Who will ferry the Muckinish Man?"

As to Corclogh, Joyce considers the meaning of "Cor" in place names in the following extract:

The islands, or part of them, were also known as "The Cribbies." We don't know  what this word means, except that it turns up in several  counties as applying to islands. Perhaps it refers to the marshy or dangerous nature of these river islands.

The Village and Islands are accessed from Banagher by taking the Crank Road. A strange name, it derives (as I learned from James Scully of the Offaly Historical and Archaeological Society on my recent weekend in Banagher) from the mechanical "Crank," as found in Crank-shaft and Crank-handle, devices that have two right-angled bends, as does the Crank Road leaving Banagher, (and, less significantly, as it bends around Rody Killeen's).