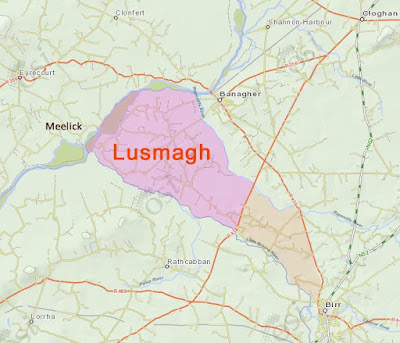 The name and existence as a cultural unit is much more ancient.

Bounded on 3 sides by rivers: Shannon, Lusmagh River (a.k.a. Rapemills River) and Little Brosna, Lusmagh is almost an island.

Formerly part of County Galway, it is still part of the Diocese of Clonfert (in Galway), and its people interact socially with the people of east Galway.

A visit to the parish cemetery in  Kilmochuna shows a similar range of family names on the headstones as are found in the cemetery at Meelick, on the other side of the Shannon, e.g., Mahon, Madden, Killeen, Larkin, Sheils. Sullivan, Lantry, Dolan.

Before 1840, the Shannon was not navigable at this stretch, between Lusmagh and Meelick, but was a marshy area of many small islands. People could actually make their way from one to the other on foot. A navigable  "New Cut" of the Shannon was excavated and completed by 1845, when Queen Victoria came over to open the new Lock Gate connecting to the Shannon below Meelick, since called "Victoria Lock," but also known as "Meelick Lock."

The Parish is more extensive than the DED and contains townlands that belong to the DED of Mounterin (shown coloured orange).